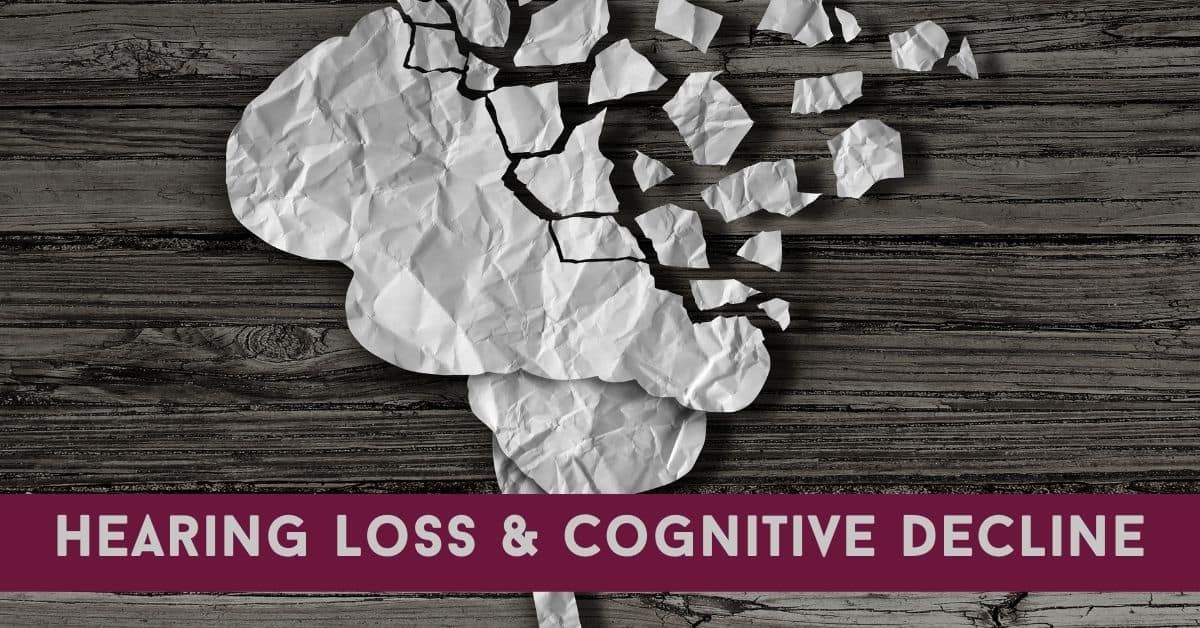 Age-related hearing loss affects about half of those above age 75, and nearly 100% of centenarians. It seems that anyone who lives long enough will eventually have to deal with some measure of hearing loss. While once we may have thought of age-related hearing loss as an annoying but benign aspect of getting older, research in recent decades has shown that the picture is more complicated than that. Untreated hearing loss appears to set off a cascade of negative health effects, and cognitive decline is one of the more recent additions to the list.

One of the first problems people experience as a result of their hearing loss is fatigue. When they’re in conversation with someone, straining to hear makes them more tired than they’re used to.

We can attribute this increased fatigue to “cognitive load,” or making the frontal cortex of the brain work harder. You see, under normal circumstances, the auditory cortex receives the signals coming in from the ears, determines what is speech and what is not, and even interprets that speech and commits it to short term memory.

When we can’t hear properly, our auditory cortex only receives garbled signals. It then falls to our frontal cortex to assemble meaning out of context clues, facial expressions, and small fragments of speech, and then commit this to short term memory. All the while, our frontal cortex still has to do the work of deriving the meaning behind the speech we are hearing, formulating responses and thinking creatively. All this extra work is extremely exhausting and makes us tired.

As time passes and our hearing loss remains untreated, the auditory cortex will eventually shrink. It’s not that the cells die, but that the space between them sort of collapses, making the auditory cortex smaller and allowing the frontal cortex to grow. While this demonstrates adaptive neuroplasticity, in this case it’s not really a good thing. In fact, these types of changes are one going theory as to how hearing loss results in an increased risk of dementia and cognitive decline.

Many hearing healthcare practitioners offer hearing aid training courses to new wearers exactly for this reason. When someone waits to get hearing aids until they can barely hear, their auditory cortex has likely shriveled up and they have lost the ability to comprehend speech even when they can hear it clearly. With some effort, they can regain this ability, but it’s much better to get hearing aids before the problem goes this far.

Another theory is that social isolation, another frequent outcome for those with untreated hearing loss, reduces the brain’s activity level. Interacting with others is one of the most brain-activating things we can do, and when we don’t see other people too often, or don’t interact with them when they’re present, it may be that our brains fall into dementia from disuse.

The third theory is that the same atrophy that causes a person to lose the ability to comprehend speech eventually results in dementia. Even those with hearing loss who do not develop dementia are more likely to say they have memory trouble, likely because the auditory cortex and the short term memory are so closely intertwined. As the relationship between the auditory cortex and short term memory is forced to change, dementia can be an outcome.

Whatever the state of your hearing loss, if it’s noticeable in conversation it may be time to consider hearing aids. The Better Hearing Institute, a non-profit organization, recommends getting a hearing test once every decade until age 50 and once every 3 years after that. If you’re due for a hearing test, schedule one today and see if it might be time for hearing aids. If you need them, the earlier you start wearing them the less trouble you’re likely to have down the line, so don’t hesitate!